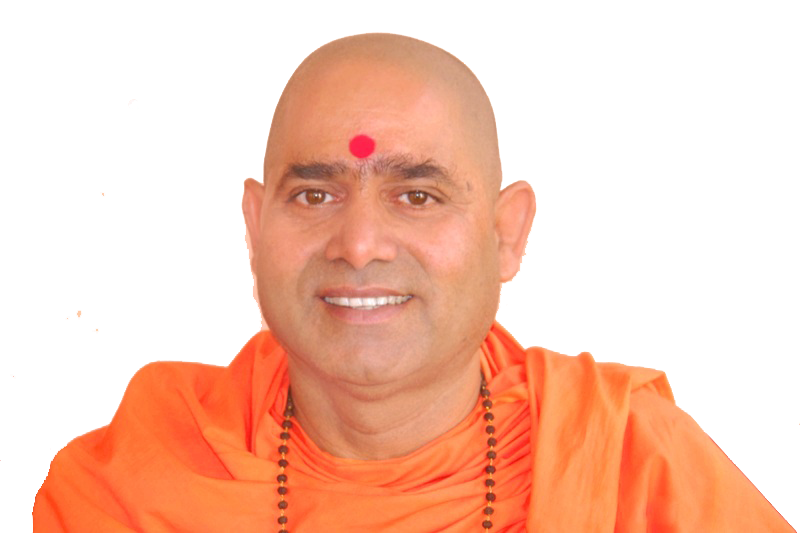 His Holiness Paramahamsa Swami Satyaprajnananda Saraswati is cast in the heroic mould of the great Indian Tradition of Sanyas. He was born at Lukapara, an obscure village in the district of Raigarh of the present province of Chattisgarh on 10th September,1956 .He spent his adolescence by learning and taking formal education in Sanskrit at Kailashnatheswar Gufa , Chattisgarh, a beautiful place surrounded by mountains and forests .At the prime of his youth, his Guru Paramahamsa Swami Satyananda Saraswati initiated him into Sanyas on the Mahasivaratri Day,1980. Swamijee stayed at Bihar School of Yoga, Munger , for five years under the sagely guidance of his Guru. Then, with the blessings of his Guru, he left Munger and traveled the length and breadth of India as a parivrajaka. On the last lap of his parivrajana, Swamijee reached at Puri, the holy abode of Sri Jagannath, the Lord of the Universe. He prayed in the spirit of “Atmano mokshartham jagat hitaya cha”. Ripened with divine experiences, he conceived various ways and ideas for the well being of humanity. Blessed with the divine inspirations of Lord Jagannath and Mata Bimala, Swamijee came to Bolangir, a poor and backward district in the map of India and chose this place as the center of his mission.

His mission received a concrete shape in the form of Viswatma Chetana Prishad (VISWATMA CHETANA PARISHAD) - a socio-spiritual & charitable organization in 1985 with its permanent headquarter at Ananda Niketan, Khujenpali, Balangir.

Since its inception, Viswatma Chetana Parishad, a socio spiritual and charitable organisation is striving to serve the humanity with a five-pronged approach of Sikshya (Education), Swasthya (Health), Shrama (Labour), Seva (Service) and Sadhana (spiritual practices).

Marriage is sanctimonious in our scriptures as a yajna .it is one of the samskaras or sacraments . After the wedlock ,the husband and wife start their journey of life in the world with a spirit a new and they try to move towards moksha(Liberty) by fulfilling the other three purusarthas –Dharma , Artha , and Kama”.

Spiritually , ‘Brahma ‘ means paramatma , the supreme soul . One who maintains to think of brahma , tries to visualize the glimpse of brahma in everything and everybody can be dubbed as a brahmachari . One who is engrossed in brahma – bhava is brahmachari . Going by this conviction , even a gruhastha may be a brahmachari “.

Acharya Shankar was the worshipper of Brahma –the formless ,attributeless Brahma .The philosophy of Shankar is not only rooted in the concept of Brahma but also it recognizes the various manifestations of that omnipresent Brahma .As a vocal proponent of Advaita , Acharya Shankar tried to build up a collective consciousness to strengthen national unity and solidarity.

The Indian approach towards life is a holistic one .Death is not the end of life, it is just a pause .We are all travelling along an infinite path. We are revolving in cycle of birth and death.

Meditation enables on individual to be conscious of the deeper aspects of life superficial attractions ,superfluous desires fade away .It makes on optimistic and practical in life .The capacity to discriminate between the good and bad , virtues and vices , truth and untruth ,reality and illusion is augmented .Meditative people always take right decisions. Meditation gives confidence and inner strength to face life’s challenges . One does not fumble and mumble if anything negative happens .Today people all round the globe are in search of peace and happiness .meditation assures both.

Rich and poor are relative terms .In this world ,one can always find the rich and the poor .One may be poor due to his prarabdha but there is every possibility that he can be rich by dint f his purusartha –his hand labour and incessant striving .One may be an ignorant fellow on the basis of his prarabdha but he can ignite and enlighten his being with knowledge.

Founded in the 1985, VISWATMA CHETANA PARISHAD is marching ahead to fulfill its aims and objectives in an unfailing and unflinching manner. It zealously exposes the cause of spirituality, devoting itself for the service of society as a whole irrespective of caste, creed, color, sect and religion .It embraces within its fold every man as a divine being with full potential to realize the self.